Mozart’s era was a time of major intellectual, political, and 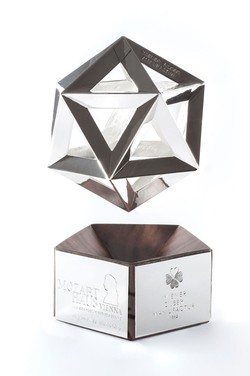 social renewal, particularly in Vienna, where ideas such as tolerance, freedom of expression, and a rejection of arbitrary rule came to the fore. These enlightened thoughts and the very concept of the Enlightenment can also be found in Mozart’s works.

The new Vienna Mozart Prize for Enlightenment and New Ideas creates a link from Mozart’s day to the present and pays tribute to outstanding personalities who have influenced critical discourse, particularly through the medium of music, in the spirit of the Enlightenment.

The innovative prize, which offers scope and inspiration for a vast range of associations in connection with the Enlightenment, is the result of a cooperation between Mozarthaus Vienna and Wiener Silber Manufactur, represented by its owners Brigitte and Georg Stradiot, and the architect and designer of the prize Gregor Eichinger.

In collaboration with the City of Vienna Department for Cultural Affairs, the jury nominated the pianist Rudolf Buchbinder in 2017 as the first winner of the Vienna Mozart Prize for Enlightenment and New Ideas.