History of the building2613

The fifteenth-century building has been open to the public for over seventy years. 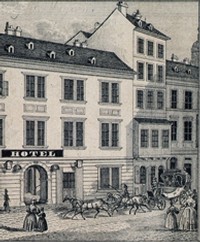 After the refurbishing had been completed by Mozarthaus Vienna Errichtungs- und Betriebs GmbH in close cooperation with the Federal Office for the Preservation of Monuments and Wien Museum, which curates the Mozart apartment, a permanent exhibition was opened on 27 January 2006 in an area of some 1,000 square metres and with the room layout that existed during Mozart’s time, with wide-ranging information about the ten years that Mozart spent in Vienna.

The two-storey seventeenth-century patrician house, whose original entrance was at Schulerstrasse 8 (at the time called Grosse Schulerstrasse, Stadt No. 845), had been altered in 1716 by its owner at the time, the master stonemason Andrea Simone Carove, to give it the form that Mozart knew when he moved in in 1784. He acquired the right of abode to the “representative noble dwelling, centrally situated, bel-étage, 4 rooms, 2 closets, kitchen, ground floor, cellar, 2 wooden vaults” for an annual rent of around 450 gulden from the Camesina family, or more precisely Maria Anna, the widowed daughter-in-law of the court plasterer Albert Camesina, who had taken over the house after the death of his father-in-law Carove around 1720.

An exhibition of artworks by Oskar Stocker on women and Mozart can be seen from 11 May to 2 October 2022 – women as part of his circle, and female figures in his operas.

Hasn’t everything already been said about Mozart and his women?

No, because the artist Oskar Stocker is not interested primarily in Mozart and his real or imagined lovers but approaches the musical genius through his diverse relationships with women. The leitmotif running through the exhibition is Mozart’s relationship to the women in his life and to his female opera figures. Stocker’s portraits of women give an indirect portrait of the composer himself – imprecise, sketchy and shadowy.

Oskar Stocker offers portraits of six women who influenced his life: his mother, his sister, his wife, his mistress, a student and a patron. They resemble one another as prototypes of the life of women in the eighteenth century. There are also sketches of female opera characters and singers, for whom Mozart wrote specific arias: the Queen of the Night, Susanna and Donna Anna. These fictional characters are quite distinct. The portraits portray painterly emotions concentrated into powerful images.

The exhibition offers several approaches to the theme. First there are Oskar Stocker’s portraits, far from strict realism. Then there is a musical approach through the innovative interpretations by the Mozart conductor Sascha Goetzel. How does Mozart characterize women’s roles through music? And finally there is the access to the real women through short biographies by the cultural historian Andrea Kühbacher.